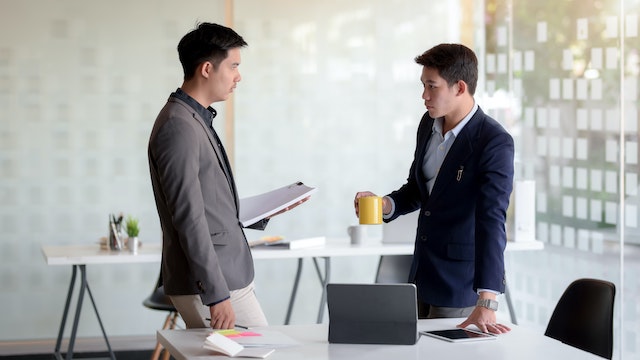 We have suggested you should use meetings to communicate more effectively. And we meant it. But folks, there is a limit to that.

Meetings are very important for getting information out to your employees and clearing up any confusion so they can focus on their work instead of on whether or not the company’s about to go under. But do not fall in love with the idea that these folks are sitting at your feet waiting for great wisdom from you…they just want to know about the latest benefits package, or something. It is easy, when you are in charge, to fall into the trap of calling meeting after meeting after meeting, and letting them drag on and on and on, but DON’T DO IT.

Some bosses have meetings because they do not know what else to do, and if they can go home at night and say “wow, my day was just crammed with meetings,” then they feel like they accomplished something even though they probably didn’t. And of course, some employees like to sit in meetings because it beats working. How often have you sat around listening to someone talking about what they should be doing instead of actually doing it? Try not to be that person, OK?

Work rarely gets done in a meeting. They are designed to pass information and to discuss issues, not to get things done. There are exceptions, of course, like when you have a team project and you need to come together to make some decisions or finalize a project, but most meetings are designed for information transfer. So, go into a meeting with low expectations for getting work done.

I once had a boss who held section meetings every Monday, Wednesday, and Friday for an hour at a time. This was so he could be updated on the work we were doing, which of course we had not done much of…because we were sitting in meetings. Do the math: 3 hours (sometimes more) in meetings is nearly 10% of a 40-hour work week. That’s a lot of wasted time.

After a year and a half in this very bureaucratic division, I moved into a strategic planning division. Finally, I was out of the mundane, inbox-to-outbox world and stepping into some long-range thinking. What did my new boss tell me? “We have meetings every Monday, Wednesday, and Friday for an hour at a time.” Oh, and these were just the “administrivia” meetings — we would also be having “focused sessions” to explore different issues. I told him that when I needed other people to sit around and talk about my project instead of working on their own, I’d let him know (I said it like a joke, but it really wasn’t).

One other point about this boss and then we will move on: he used to answer the phone during his meetings. Never never never never never do this. Do not waste your employees’ time by calling them for a meeting and then conversing with someone who is not there. Trust me, we were NOT impressed by how important he was. If possible, turn off the ringer on your phone. If you really do not think you can ignore the phone or e-mail for very long, well, that is your incentive to wrap this up quickly. Personally, I like the attitude of a law firm in suburban New York that banned all electronic devices during important meetings (which made me wonder: if the meeting is unimportant, why have it in the first place?). Get in, get it done, get out, and then worry about other stuff.

If it seems like we are opposed to meetings, we are not. We are opposed to unnecessary meetings, to meetings that last too long, and to people sitting around talking about work but never actually doing any. If you are working in a factory or in some bureaucratic office, people might enjoy going to meetings because it gets them away from the mundane work they are doing, but if you have got creative people who are excited about their work, the last thing you want to do is throw water on that enthusiasm with two hours of stories about your latest vacation.

The first collection of Dilbert comic strips was called Always Postpone Meetings With Time-Wasting Morons. If you can, let this book be your bible. 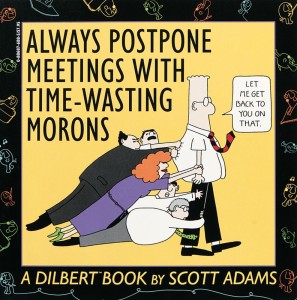