Getting to your destination rarely happens in a straight line. In addition to curves and detours along the way, you’re likely to have some hills as well.

Take, for example, San Francisco’s Golden Gate Bridge. If you were to go for a run from the historic Fisherman’s Wharf to the iconic bridge, you would have to not only run around the water and through some parks, you would also have to run uphill. After all, you’re starting at the water’s edge, but the bridge is high above the water, so it stands to reason that you’ll have to run uphill to get there. That’s not a bug in the process; it’s a feature.

Most of the goals you have will require an uphill battle. You will have challenges that need to be overcome, so you need to pace yourself accordingly. Some of those challenges may be hidden at first; you’ll think you know where you’re going, then you come around a curve and see a hill ahead. There will be times you feel like you’re coasting downhill, having overcome a challenge and now taking it easy, only to find another upward slope ahead. You might have some great momentum going into that hill, thinking you’re going to fly up and over it, only to bump into other runners going much more slowly. Even the run up or down the hill may not always be in a straight line.

The trick is to do some hill training in advance, getting yourself ready for challenges by building your skills. It also helps to do some recon in advance, so you aren’t taken by surprise. Hills may not be fun, but they’re a lot easier when you’re ready for them.

And I’m not just saying this because I ran The BioFreeze San Francisco Marathon yesterday. 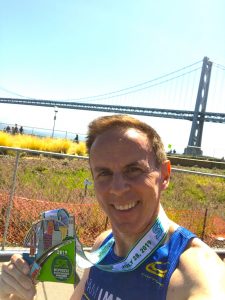